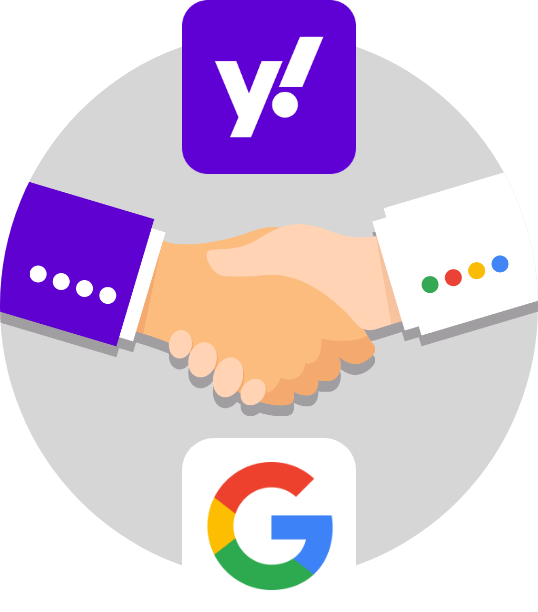 In their quarterly earnings report yesterday, Yahoo announced that it has struck a new deal with Google that has big implications for the search marketing industry. The 2 search giants have reached a 3-year agreement that would allow Yahoo to show search results and ads from Google instead of Microsoft. The deal has not yet gone into effect, as it still needs approval from the federal government. Also, the deal will not apply to European search results, since it would probably require costly litigation surrounding antitrust laws. The announcement comes as little surprise to industry experts, as Google and Yahoo have worked together in the past, and additionally because Yahoo CEO Marissa Mayer herself is a former Googler.

How Does The Google / Yahoo Partnership Work?

Google has its own system of displaying search results based on a large set of algorithms that decide which website to show when a user does a search. Yahoo, however does not, and has been using the Microsoft search engine to power search results (the same engine that powers Bing.)

The new partnership would allow Yahoo to use Google’s search engine to power its results, in addition to Microsoft’s. With the new deal, Yahoo could display search results from Microsoft 51% of the time, and from Google 49% of the time. Yahoo search results could essentially become half Bing, half Google. This deal also applies to paid ads (PPC), so instead of exclusively displaying ads from the Microsoft network, Yahoo could begin to show Google Adwords ads 49% of the time.‍

The Storied History of Google and Yahoo

In the early 2000’s Yahoo was powered by Google, and showed Google’s search results and ads. In February 2004, however, Yahoo dumped Google in favor of using its own proprietary search and ad system that they had developed in-house.

Then in 2008, Google and Yahoo began talking about renewing their partnership, until the US Department of Justice stepped in and blocked the deal from moving forward.

Fast forward to 2009, and Yahoo, still running on their own search and ad system, decides to switch to Microsoft and dump their in-house system.

Now, 5 years later, Yahoo appears to be looking towards Google again as an opportunity to generate more revenue through their search and display system.

Why Is Yahoo Partnering With Google?

The main reason for the new Google Yahoo deal appears to be financial. The new partnership gives Yahoo an undisclosed percentage of ad revenue from PPC ads it would show from Google. Yahoo, which has been financially sluggish in recent years, could potentially make more money showing Google's ads than from showing Microsoft's ads.